One week with my Google Pixel 2

Last week I traded my iPhone for a Google Pixel 2, after nine years of being a faithful iPhone fan. In the article I explained my reasons for wanting to switch away from Apple to Google. As it turns out, quite a few people have found themselves in the similar position of considering switching away from iOS to Android and are interested in my experience with it. So this post is, in no particular order, a short list of my experiences and opinions so far after owning a Google Pixel 2 for a week.

The camera is amazing!

Lets not beat about the bush here. The camera on the Pixel 2 is incredible! Way better than any other smartphone camera I’ve ever used. Portrait Mode in particular blew me away (although it’s not perfect, more on that below). This was the very first picture I took to test the camera.

The depth of colour, texture detail, low light handling, and accuracy of the software powered “Portrait Mode” effect make for an amazing result. Combined with the AMOLED screen, viewing photos on the Pixel 2 is truly incredible. It’s definitely the thing that blows you away on this phone. Everyone I show my photos to is very impressed.

That being said, after using the camera for a while you begin to notice where the AI powered Portrait Mode begins to fall down. Take the following image:

There are a few noticeable things in this photo that are consistently recreate-able when using Portrait Mode:

While these issues are nit-picky, sometimes they can be very obvious in your photos which ruins the whole effect. On the upside my hope is that, as Portrait Mode is AI powered, it will improve over time and these niggly issues can be ironed out.

At this point I’d be interested to compare the AI powered Portrait Mode effect of the Pixel 2 to the dual-camera solution that the iPhone went with to compare the quality of the results. Let me know in the comments if you have anything to add here.

The fingerprint sensor is fast but not overly accurate

This one is actually a pretty big gripe with me at this point. I never had any issues with the fingerprint sensor on my iPhone and the scanning process seemed to work well enough to cover the edge of my fingers properly. On the Pixel 2, however, it didn’t ask me to scan the edges of my finger when registering my fingerprint, and you can notice the difference. I quite often get a “not recognised” attempt when trying to unlock my phone which is annoying as most times I need to do it twice.

And that’s not even the worst of it. The fingerprint sensor is fast and sensitive. Which seems like a good thing. Until you realise that, because the sensor is on the back of the phone, every time I put my hand in my pocket and brush the phone with any part of my hand, the phone thinks I’m trying to unlock it. It also vibrates slightly when you get a “not recognised” attempt. At first I thought I was getting lots of notifications on my phone while my hand was in my pocket, until I realised what was happening. It was trying to unlock my phone every time my knuckles brushed the back of the phone.

There was even a couple of times when I pulled my phone out of my pocket to find that fingerprint sensing had been temporarily disabled as it thought I had been trying to unlock my phone and failed too many times (thankfully I could still use the pin fallback in this situation). Very annoying.

Overall the battery life seems better than my iPhone 7. Last weekend I was at a wedding all day (e.g. 3 hours of Spotify over bluetooth in the car, many photos taken etc.) and it lasted all day.

Switching to Android has been relatively pain free (so far)

First, let me say that the built in “Transfer from iOS” setup that comes with the Pixel 2 worked well and I had all my contacts, photos, apps etc. transferred within 30 mins. I have to acknowledge at this point that I already use Google for things like contact syncing and photos, so this process was probably easier for me, but it seemed to work well in general.

The other thing that was nice about switching to Android from iOS is that all of the day-to-day apps that I use on iOS have comparable versions for Android. This is what my home screen currently looks like. 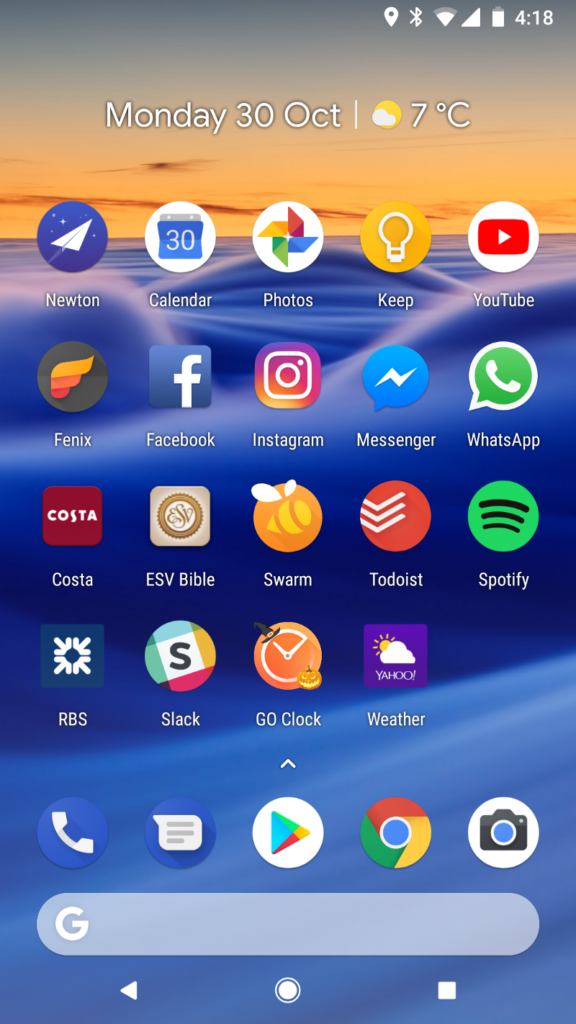 As you can see apps like Newton (email), Todoist, RBS (banking) etc. are all available on Android which makes the migration far easier than I expected.

Actually, the apps I’ve been most disappointed with so far are Twitter alternatives and Facebook. The Facebook app, despite being an “official” app, seems like a buggy mess compared to the iOS version. Having the navbar at the top is annoying and seems strange given it’s at the bottom of the screen in the iOS app. And let’s not get started about trying to tag people in photos 🤦‍♂️

I’ve never been a fan of the official Twitter app and I’m a big fan of Tweetbot on iOS. The Twitter alternatives on Android seem poor in comparison. Basically I just want Tweetbot for Android.

Apps aside, I’ve found Android to be alright for the most part. One of my biggest worries moving away from iOS is that Android would be a disappointing mess. However, I’ve been pleasantly surprised.

There are some Google-specific touches that are really nice. Like being notified if “this may be a spam call”, Google Assistant suggesting reminders for things it’s seen in your emails and being notified of current traffic in the area when you get into the car, to name a few examples. In general Assistant is excellent and picks up my Scottish accent very well (which I already knew from owning a Google Home for a while). It’s a big improvement over Siri, even though I don’t really use it in earnest.

Don’t get me wrong, Android isn’t perfect. I’ve come across a couple of small bugs (e.g. sometimes touches aren’t picked up correctly) and things like notifications are still pretty hard to wrangle (i.e. not huge improvement over iOS). Another thing that annoys me is that Allo (Google’ iMessage alternative) doesn’t have native support for SMS, so I can’t use it as a direct replacement for iMessage (meaning I hardly use it at all). But in general, Android has been O.K. so far.